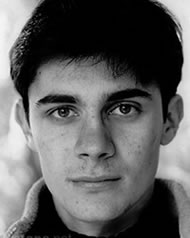 Ben (full name Benjamin Maurice Silverstone) was born in the Primrose Hill area of Camden, London on 9th April 1979 (Note, this date is a correction from that previously stated on the site). His parents were Anthony and Beverly Silverstone, who sent him to the exclusive private St Paul’s School in Barnes, London. Ben’s breakthrough was via family friend, Mike Figgis who gave him a major role in The Browning Version (1994) as Taplow. His next motion picture was a minor appearance as the young Humbert Humbert in Adrian Lyne’s remake of Lolita (1997). Certainly the biggest role for Ben has been that of Steven Carter in Simon Shore’s directing debut, Get Real (1998). Although no box office smash, Get Real has attained cult status with its fans. Ben continued acting whilst at University in England, appearing in many stage productions at Cambridge. After gaining a First (top class) degree in English in June 2001, Ben has since left his acting career behind him and is a successful layer working in London.